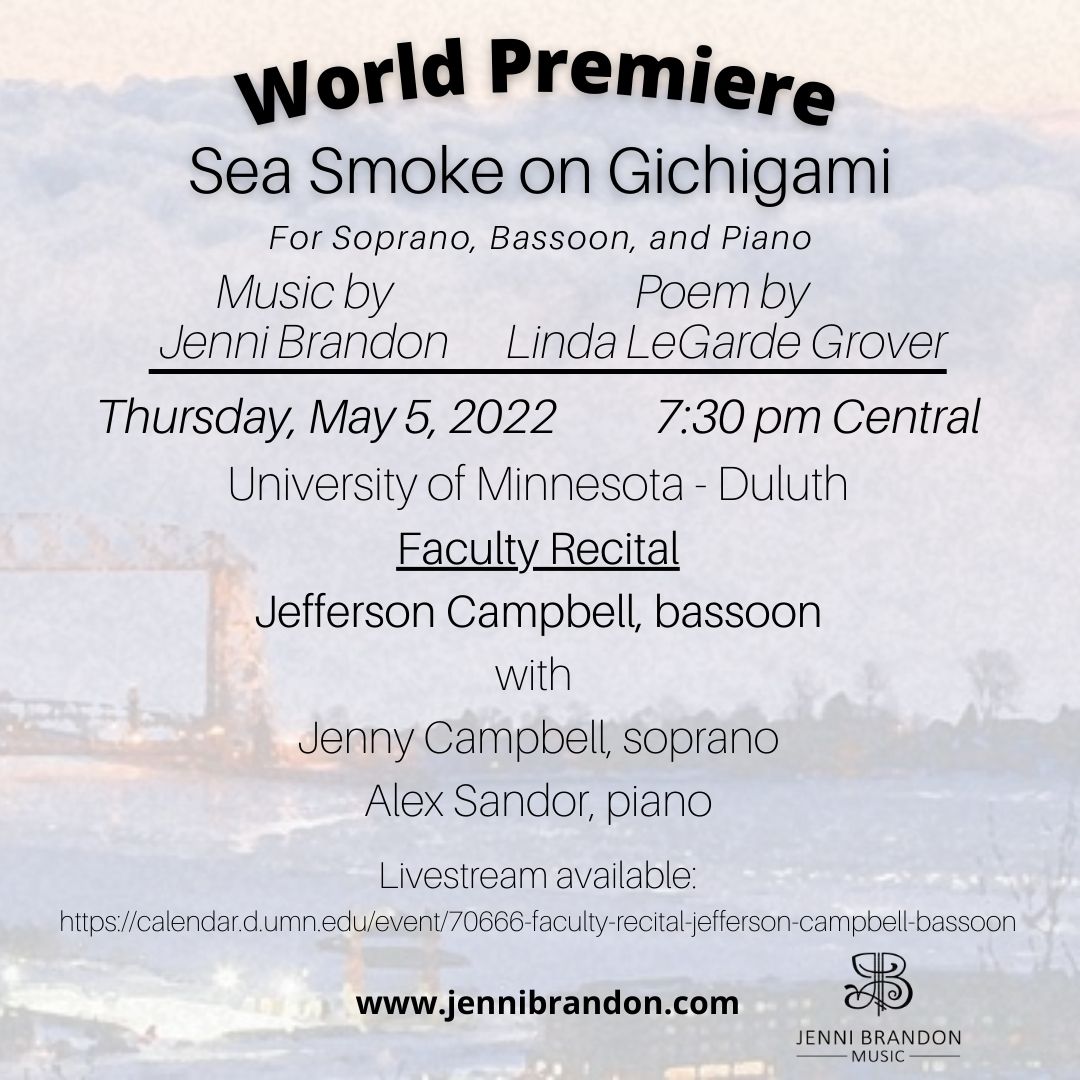 Sea Smoke on Gichigami by Jenni Brandon for soprano, bassoon, and piano tells the story of the elusive mythical creatures that arise out of Lake Superior (Gichigami) as the sea smoke covers the lake. Sea Smoke is a phenomenon when water vapor forms when cold air moves above warmer water.  As the water vapor rises, the cold air only holds so much moisture, forcing the water to become fog. As it rises from the lake’s surface, it creates the heavy “sea smoke” that blankets the area.

In the stories of the Ojibwe people who lived in this area, they told of an underwater mythical being called the Mishipeshu, or the Great Lynx.  With the body of a feline, horns of a deer, and scales on their back, they were said to live in the deep parts of Lake Superior (Gichigami), causing storms and death, and would have to be placated in order to safely cross the lake. Within the poem by Linda LeGarde Grover, you’ll meet these creatures and their activities during the four seasons of the lake, from fall to winter, spring to summer. The music paints a picture of these creatures in these seasons, from the beautiful colors of fall leaves reflecting on the surface of the water, to stormy and terrifying trips across an unforgiving lake. Ms. Grover writes of one story that tells of a rare sighting of these creatures – a young woman rowing a boat across the lake sees these mythical beings, and returns to shore, her hair now white from the terror and awe of her experience.

In representing this story using the words of Ms. Grover and setting them to music for soprano, bassoon, and piano (there is also a marimba version), I wanted the creatures to play an extremely important role in this story, but also allow the sea smoke and lake to be characters as well.  These powerful elements of sea smoke, water, legend, and location are an incredibly important part of the lives of the Ojibwe people, and it is an honor to be able to share this legend through music.

Sunrise
these coldest mornings of gelid moons
sears the horizon, slicing dawn from night
red-orange light captured on facets of ice crystals
that spin and glitter in the air, falling
to the caul of translucent marble
that covers Gichigami.

Beneath that frozen vastness
the lake world stirs with the earth;
light diffused to the palest of golds
rouses spirits curled in sleep
on the valleyed lake floor; awake
they push with scaled claws and rise,

These coldest mornings of gelid moons,
their breath white steam and silver mist
rises from the vastness of ice.
sea smoke on Gichigami.

On the shore an old man watches the song
gray white silver drifting, rolling across the lake.
He lifts a palm in morning prayer;
tobacco scatters in four directions.

The song begins with spring
and the Creator who made the earth
streams rivers lakes oceans
grass plants flowers trees
the medicines the seasons
birds animals insects
and finally the first man,
born to the granddaughter of the moon.

Shimmering cold in summers of the past
the lake carried them weightless buoyant floating
Sun glinting on wet scales and claws
on the shore they rested
against gabbrous rock heated by the
sun,
this before rancor reached the world
before the Great Flood and finally redemption
and the retreat to the underwater,
the cold darkness of the valley a
grace of sorts.

Since then, in early autumn
when skies reflect gentian waters of the lake
they rise with the tide, lured
by the colors of the hillside
water-blurred red orange yellow leaves
against the black of rocky cliffs
yet obliquely they gaze, cautiously
remembering the spirit who dazzled by the
brilliance
drifted lost toward an inlet
where a young woman rowing alone
in a green-painted wooden boat
recoiled, her hair whitening.

Late autumn ice forms and breaks
heavy on the surface of the lake
slowing the movements of the spirits
whose scales and claws
gray and dull starving for the sun
reach above Gichigami to grasp the wind.
on the shore waves collide
with rocks and trees
to crush those fragilities built by man.

Winter subdues the waters to ice;
below, the spirits sleep lightly
dreaming of the song they will sing
at sunrise.

These coldest mornings of gelid moons.